The FlyFreely Field App lets you manage your mission electronically - even in remote locations with no mobile coverage.

Generally, there are two scenarios in which you will use the field app to manage your missions:

FlyFreely's field app allows both scenarios to occur even when operating outside of mobile coverage.

If you've pre planned your mission in the office app, you can easily take it 'offline' via the field app. Once a mission is downloaded onto your mobile device, you no longer require a data connection to complete the mission.

Your missions have now been downloaded to the device and will be available to use regardless of data availability.

This includes all mission documentation, checklists and notes.

Note: Only missions that have the Ready to Fly status will be downloaded to the field app. This means that any missions requiring approval can only be downloaded after the approval has been completed.

When you move outside of mobile coverage, you'll see the 'no connection' icon on the New Mission button (see the above image). This indicates that while you can execute your existing missions, you're unable to use the field app to plan new missions. To create and plan new missions in the field with no coverage, you need to enable 'offline mode'.

Using FlyFreely's "offline mode" you can plan and execute missions outside of mobile coverage areas. Any missions created while offline will be uploaded to the server when your device next detects a signal.

In order to facilitate this, you need to enable 'offline mode' on the device before you lose coverage. This will download any non-approval workflows onto the device so that you can use them in the field.

Note: Only workflows that do not require an approval can be downloaded for offline use. If you wish to use a workflow for which an approval is required (eg a company ReOC workflow), you will need to pre-plan your mission in the office app and have it approved and downloaded prior to leaving mobile coverage or WiFi. 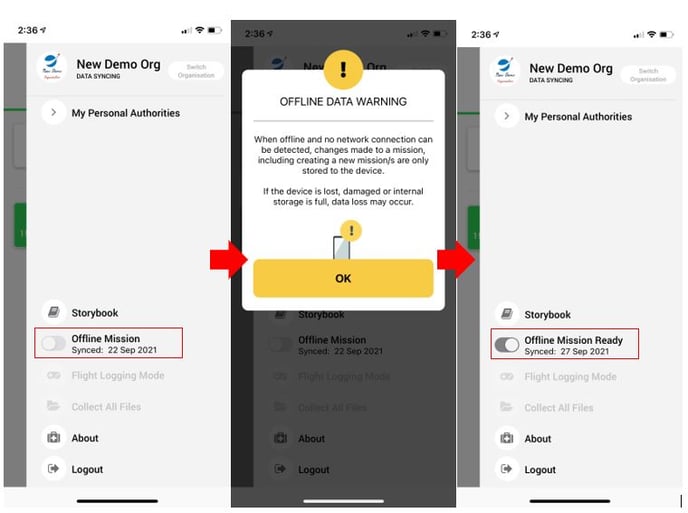 The button will now show 'Offline Mission Ready'. The date at which the offline sync occurred is also shown. This date is relevant as it indicates the last date at which the downloaded workflows were known to be current.

NOTE: Any changes are made to your workflow/s (via the office app) will not be reflected in the field app while you remain in offline mode. To ensure that you always download the most up to date version of your workflows, it's good practice to disable offline mode when you're not actively using it.

You're now in offline mode and can create and plan new missions while operating in out of service areas. When a signal is detected by the device, your completed missions will be uploaded back to the server automatically.